The original site for Spilsby aerodrome might have been on the Gunby estate but at the time its owner was Field Marshal Sir Archibald Montgomery-Massingberd who persuaded the RAF to relocate it a little to the south. Even so the shorter north south runway ended only just short of the park a kilometre from the estate’s ice pond. The railway also skirted the estate with Burgh Station situated close to the park giving direct access to London. It was two a half kilometres from Burgh but only one kilometre from the hall. With such easy access to London in the early twentieth century there was a “golden era” at the hall. To quote the National Trust website –

Stephen Massingberd moved to Gunby in 1898 shortly after his mother’s death, starting a golden era that was to survive both World Wars and the transfer of Gunby to the National Trust in 1944.  Stephen was newly married to a beautiful, artistic young wife. Together they were to transform the local musical scene introducing singing competitions throughout the county, training choirs and orchestras, performing concerts and operettas and bringing first class music to this remote corner of Lincolnshire.

Yet Gunby was not so remote then as now. Both Stephen and his wife Margaret had family living in London who were gifted musicians so when Margaret died prematurely in 1908 it was other members of their families who were able to carry on the work she started thanks to a good train connection to the capital.

Today to get to Gunby from the south or midlands either by rail or car it is via Grantham. So if someone made this long journey what would they be hoping to find at this NT property? The most notable thing is that what they saw would be remarkably unchanged except for lacking the vibrancy that the Massingberds had once brought to the place. In fact there has been no obvious alterations to the house and grounds in the last fifty years. Unfortunately this includes the services on offer. Visitors might even think it is not a NT property as the facilities remain very basic particularly the catering. The preparation and service area is in an open barn as is where you also eat and drink. (Update: This was refurbished in Spring 2019)

To put a more positive spin on it you could say it is not over commercialised or developed. It gives a sense of being frozen in time. Set well away from the main road the approach is through a long avenue of limes surrounded by an accessible mature parkland grazed by Lincoln Red cattle and an important ecosystem for bio-diversity. (See South Ormsby Estate Blog.)  The car park is a grass paddock and you enter through an arch beneath a small white clock tower. There is a complete absence of modern technology when receiving your ticket and information.

The entrance takes you into a cobbled courtyard with the house to the right and refreshments to the left and a coach house and stables in between. It is the gardens that are the main attraction however which you enter through a discrete doorway set in an old wall. The gardens are compartmentalised by old brick walls that together with the mature trees give shelter to the roses and other flowers that fill the borders. Passing through archways in these walls leads to an orchard, lawns and a canal water feature, which in turn leads to a little church hidden away beneath tall trees. Beyond the church is the extensive parkland that is crisscrossed with footpaths. The original hall dates from 1700 with an extension in the late nineteenth century. 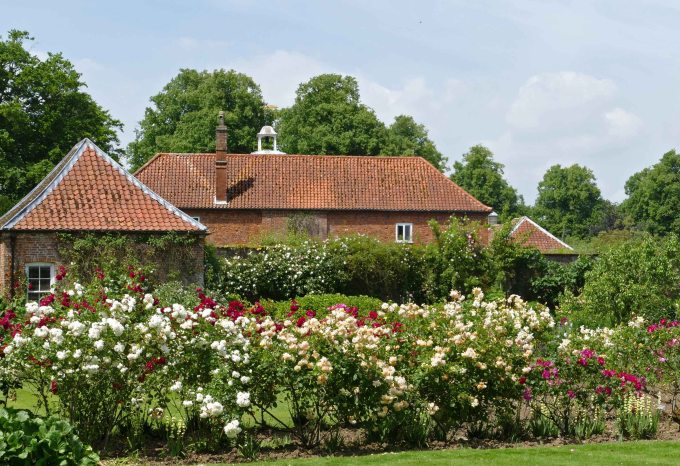 Despite being only ten kilometres from the North Sea and standing on the last hill of the Lincolnshire Wolds, the old walls and tall trees give sufficient shelter to guarantee a colourful display of delicate plants every summer. It could be said that the grounds are a microcosm of nearby Lymndale a hidden sheltered valley, protected by the steep wooded slopes of the chalk escarpment to the north. Just as Gunby Hall is protected from the cold winds off the North Sea but benefits from the sunny dry climate this coast enjoys for its latitude so to does the well wooded country of Lymndale have the benefit from the protection offered by the bold ridges of chalk to the north and east and the long curving ridge of sandstone to the west and south.

Lymndale, or Tennyson’s valley, like the hall and grounds also has the feel of being frozen in time being well away from busy roads with only narrow leafy lanes joining one hidden hamlet to another. It is found at the southern limit of the land deemed the Lincolnshire Wolds area of outstanding natural beauty (AONB) and is the only part where the under lying geology is not mainly chalk. This gives the area a character all of its own, which is more intimate than the broad rolling chalk hills further north.

For a small area the Wolds offer quite a contrast of scenery. At the highest and most northern limit of the AONB the nature of the landscape is more reminiscent of the Yorkshire Wolds while the sheltered Lymndale resembles more places in southern England. In one regard however it is very much a northern dale, because in common with many rivers further north, and especially in Yorkshire, the River Lymn’s course was deflected by great lobes of ice pushing south from Scotland during the peak of the last ice age.

The AONB starts just across the A158 or Lowgate from the Gunby estate and stretches all the way to Caistor fifty kilometres to the north west. The geology of the Wolds is like a sandwich with white bread on the top, which represents the chalk, and brown bread on the bottom, which represents the Spilsby sandstone. The filling is made up of a relatively thin series of other rock strata of different colours and toughness. The sandwich is not perfect though for it is as if a giant has taken a huge bite out of the top slice of its south western corner removing the white bread and some of the filling from this area to reveal a layered landscape. It is this however that gives the southern part of the Wolds its unique character of sheltered valleys overlooked by bold ridges.

The highest point not on chalk, at 140 metres above sea level (asl), is in the west close to the source of the River Lymn, on a ridge capped by Roach Stone. From here this narrow but resistant rock dips gently to the east so that it is only at 30 metres asl by the time it reaches Gunby. In between this band of rock is responsible for many other prominent hills forming a series of bastions standing proud of the chalk escarpment. Each is slightly lower than the next before finally dipping beneath the thick layer of till beyond Gunby.