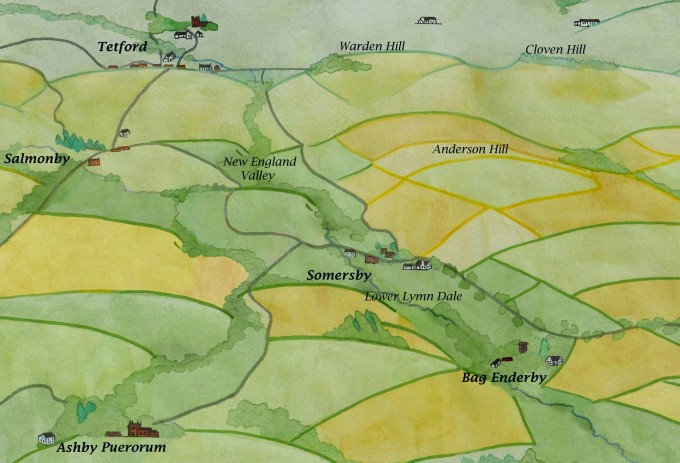 The distinctive winding shape of the New England Ravine starts just south of Tetford where the River Lymn cuts it way through a low ridge of Spilsby Sandstone to create a narrow valley two kilometres long and 15 metres deep. It has steep sides with the occasional sandstone bluff overlooking a flat boggy floor. It is wooded along most of its length and the northern half is designated as an SSSI as this is one of the few stands of ancient woodland left in the area. Its irregular shape was made by glacial flood water from the north forcing a channel between two small valleys, or gills, either side of a sandstone ridge. The northern valley is adjacent to the line of the Greenwich Meridian and so can be called Meridian Gill while at the southern end of the ravine Holywell Wood hides a spring or holy well overlooked by sandstone bluffs, which can be called Holywell Gill.

This was the location, close to Somersby, of a little schoolhouse once a medieval bathhouse. This school lasted only long enough to see Alfred and his three brothers through their early years of schooling before it was eventually abandoned. Yet the building and its location would be hard to beat for sparking the imaginative mind of a young Alfred as was the yet unrestored church opposite his father’s rectory. Thanks to his father’s extensive library and tutelage the boy was exceptionally well read and well able to conjure up fanciful stories of fairies, monsters and heroes, which he enjoyed telling to his many siblings. The bathhouse was originally placed there because of the holy well spring, which ran down into the nearby River Lymn. Now only a small pile of bricks are said to remain hidden among the undergrowth. The spring is in the middle of Holywell Wood, an extension of the wood that fills the length of New England Ravine, and in Spring it is carpeted first with snowdrops and then in bluebells, a fine romantic setting for a young man already heavily influenced by the great romantic poets of the time. Today the display can be admired from the Tetford road, which passes close by and continues round the steep slope of Warden Hill overlooking the sinuous ravine.

Although many melt water channels have been cut through the chalk wolds further north this is the only large enough to cut through the southern wolds predominant Spilsby sandstone to be called a ravine. Just two kilometres to the east though is a delightful dell where the attractive Woodman’s Cottage (Smackdam on OS maps) nestles under a sandstone bluff beside a small tributary of the Lymn and is also a less well defined version of a glacial melt water channel. Behind the cottage extends a long wood called Harrington Carrs.

Between the New England Ravine and the Woodman’s Cottage valley, which extends north to Brinkhill, is a narrow ridge of red chalk. Although this thin band of rock can be found along much of the Lincolnshire Wolds AONB it is usually hidden under thick layers of white chalk but here it has a brief chance to top the hills. Rare outside of the Wolds it stretches from Warden Hill east three kilometres to Red Hill. This narrow ridge separates Upper and Lower Lymn Dale. Warden Hill is its highest point at 113 metres. If this is the head looking west then Cloven Hill is the spine stretching east and the flanking Ormsby and Anderson hills the shoulders. Though the spine is of red chalk the flanks are made up of Carstone and Roach Stone and sit on Spilsby Sandstone. After ploughing and on into winter the red topped hills are quite a feature of the landscape contrasting with the ochre coloured lower slopes of the Roach formations beneath.

Remarkably Warden Hill can claim to be the highest freestanding hill not just in Lincolnshire but anywhere east of the M1 motorway. This means a hill with a clear recognisable summit as opposed to a plateau or long ridge or even a hill attached to either of these. This is achieved by Warden Hill standing between the two dales of the River Lymn and also having deep valleys cut either end of its ridge by glacial melt water channels.

Although it faces ridges that reach around 140 metres, it is its freestanding height of 65 metres that counts. Even Roach Ridge, on which Fulletby stands, only has a freestanding height of 57 metres because it is attached by a low ridge, 82 metres asl, to the main escarpment at its northern end. It is only when you reach the hills overlooking the Derbyshire Derwent a hundred kilometres to the west that you will find higher freestanding hills. While to the north you need to travel 120 kilometres to the Yorkshire Derwent to find bigger. Here the Derwent was blocked from reaching the sea, a few kilometres to the east, during the last ice age and cut the beautiful Forge Valley to escape the hills and start its long detour south to the sea. This left Irton Moor, overlooking Scarborough, freestanding and isolated from the rest the North Yorkshire Moors.

Warden Hill is one of those hills where the “view from” is better than the “view to”. This is because from its top are views to higher hills to the north and west, glimpses of the sea to the east and the patchwork landscape of Tennyson’s valley stretching away to the south, while immediately below the little River Lymn winds by hidden in its wooded ravine. Also the the differing layers of strata cause the hill to descend in steps from the Red Chalk peak to the Roach Stone ridge, on which Wardenhill Farm stands, then there is the wide plateau of Splisby Sandstone where most of the surrounding villages are found and eventually the narrow trough of Kimmeridge Clay along which the River Lymn flows.

You might be thinking “does the modest dimensions of this gently rolling landscape warrant such a dramatic description?” But there is another dimension that needs to be considered and this is time. The ravine, its ancient wood, the surrounding hills and the quiet dale all remain little changed after centuries. This is a landscape that two hundred years later Tennyson would still easily recognise as the area where he grew up. He spent the first twenty eight years of his life (1809-37) living here and new it intimately and drew on his familiarity with it when writing his poems through the whole of his life.

He was born too early to know of the fascinating story of how the landscape around him was shaped during the height of the last ice age as this was not fully understood until after he left the area. What he was able to appreciate, which in some cases our generation has lost, is how the varied geology created different ecological niches allowing a wide diversity of flora and fauna to flourish in the different habitats, which surrounded his home. Although these habitats remain the diversity within them has been muted by the frightening efficiency of modern farming methods.

The New England Ravine is only a little wilderness which remains untouched by “progress” but there does also remain however the opportunity to extend this haven for wildlife further downstream a few kilometres where there has been little opportunity or incentive so far for the modern world to interfere with the river’s natural course. Also the ravine is only the largest and most obvious of the many wildlife corridors in the lower dale.

Wherever streams have cut through the sandstone it has created wetland areas unsuitable for cultivation which have always remained wild. These are locally referred to as carrs and are strips of boggy woodland  of alder and sallow that form a radiating pattern centred on Somersby. To the west of the village is Salmonby and Holbeck Carrs   and to the east Harrington and Langton Carrs, while opposite is  Snake Holes Dale. A little to the south a similar  but smaller pattern is centred on Ashby. Together they could create a whole network of carr corridors connecting to the main artery of the River Lymn. Some corridors like the New England Ravine and Snakes Holes Dale already connect while others like Salmonby and Harrington carrs are detached and need extending towards the river. It would be wonderful if the reservoir of biodiversity that fills the New England Ravine could spill out down the dale. The ideal would be to create in the Tennyson Valley an island of biodiversity in a sea of otherwise intensive agriculture, which is the rest of Lincolnshire.